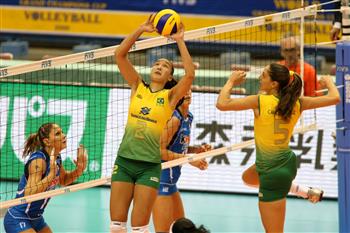 The Italian victory in the Marine Messe leaves them unbeaten at the top of the standings after four matches with Brazil in second with three wins and a defeat. World number one Brazil are expected to beat Thailand on Sunday so Italy, who are making their debut appearance in the FIVB Women’s World Grand Champions Cup, must beat Japan in the final match to be assured of claiming the title for 2009.

Italy beat Brazil 3-0 (25-21, 25-23, 25-21)
The top of the table clash saw World Cup champions Italy reverse their straight sets Olympic Games defeat at the hands of Brazil and dispose of the error-prone South America champions in three sets. Such was Italy’s surprise dominance, the world number five had three players in double figures – Serena Ortolani and Antonella Del Core on 13 points, with Simona Gioli contributing 10 – while Brazil only had Sheilla with 15 points. “I'm very satisfied with this result because it's not easy to win against a strong team like Brazil,” Italian star wing spiker Francesca Piccinini said. “Today, we played very well and were well organized – our blocking and defense were good and we didn't make too many errors.”

Dominican Republic beat Japan 3-1 (24-26, 25-22, 25-16, 25-18)
The Dominican Republic, who are also making their first appearance in the World Grand Champions Cup, claimed a major scalp by beating hosts Japan for the first time on Japanese soil and for the second time in history . Captain Milagros Cabral de la Cruz was inspirational with a 27-point haul as the win saw her side rejoice with great jubilation while for Japan, the defeat extinguished any hope of the world number seven claiming World Grand Champions Cup honours in the fifth year of trying.

Brazil Captain Danielle Lins
We knew from the beginning it would be a difficult game, but I never expected this result. Tomorrow, we need to win, so we must do what we have to do and hope that Japan beats Italy.